KaOS is a desktop Linux distribution, featuring the latest version of the KDE desktop environment and other popular software programs that use the Qt toolkit. It was originally based on Arch Linux, but since April 2013, developers started creating their own packages, which are now available from Kaos’s own depot. KaOS uses a roll publishing development model and is only for 64-bit computer systems.

KaOS has made the choice to use the Linux kernel as a base (though the Illumos kernel is under constant evaluation, and a future switch is a wish). After that choice, the best available package manager, most flexible way of package building, repository maintenance is pacman/makepkg for a rolling distro like KaOS. As for the Desktop Environment, there will never be a change, whether it is Linux or Illumos based, KDE Plasma will be the choice, Qt the Toolkit. With those choices in place, April 2013 package building for this independent distribution was started. KaOS is a build from scratch distribution, every package in every repository is build by and for KaOS. By July 2013 the initial goal of about 1500 packages was reached. 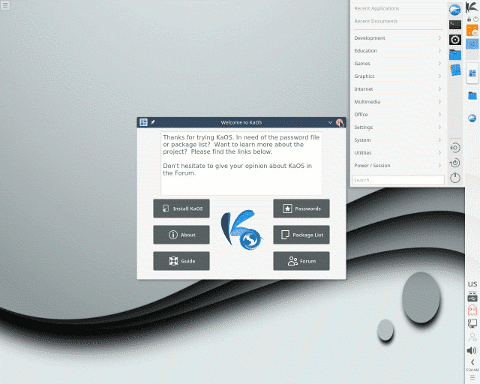 Konsole’s completely new feature is Quick Commands: open a quick commands pane from Plugins > Show Quick Commands and you will be able to create short scripts you use frequently, Konsole’s SSH plugin has been further enhanced and you can assign different visual profiles. For Kdenlive, two new options stick out: you can create customized profiles so that your rendered movie adapts perfectly to your needs, and you can also render by zones, using the guides you set up on the timeline as references.

Okular now alerts you immediately when you go to sign a document but have no valid digital certificates. With Skanpage, you can now share scanned documents (including multi-page PDFs) using KDE’s general sharing system, which allows you to push documents to instant messaging apps, online cloud services, social services, and through Bluetooth to other devices.
For the other KDE parts, the latest Frameworks (5.93.0) and Plasma (5.24.4) are included. All built on Qt 5.15.3+>.

A shift has started as to how all Python packages are built. Historically, just about all were built with setuptools through a setup.py script. PEP17 is the new standard for building python packages, see pep-0517. At this stage, KaOS is testing this transition with different new Python build tools, such as Python-flit & Python-build, with Python-wheel currently in use to install the build packages.

New applications added include Skanpage, a simple scanning application designed for multi-page scanning and saving of documents and images.

For Nvidia, a new long-term support version is added to this ISO, 470xx. The move by Nvidia to 495 meant the end of support for Kepler-based cards, thus the need to add a new legacy version.

Qt 6.3.0 is included and is now far more complete since many more are ported from Qt5, this includes qt6-location and the big one, qt6-webengine (plus all the Qt6 webengine depends on). A few test applications have been built on qt6-webengine, including some web-browsers. All of the PyQt packages are now available in a Qt6 version and QBittorrent. Plus the Kvantum theming has support for Qt6.